Fallout from Ige's PUC "Appointment" - An Overview of Day 2

Yesterday, the Governor's office released to the press the June 27 Attorney General letter advising him that according to the constitution he can make an interim appointment.  In general, I do not disagree with the Governor's authority, given by the constitution, to name an interim board or commission member when a vacancy exists.  But in a PUC holdover situation there are specific laws to address the ending of a term with no successor in place. Therefore, unlike most boards and commissions, the PUC statutes intentionally avoids the creation of a vacancy when a member's term ends. And, as I have stated before, the law is clear that Commissioner Mike Champley shall remain in office, and is legally entitled to that office until his successor's nomination receives the advice and consent of the Senate to become qualified. The Attorney General's June 27 letter (which does not have the same force and effect as an Attorney General Opinion) appears to base its findings on just the vacancy part of the constitution and it is a very weak as the letter admits:


". . . the appointment could face legal challenge because there is no definitive Hawaii case confirming that where there is a de jure holdover statute, a vacancy exists at the expiration of a term of office to allow an interim appointment."

Contradicting the June 27 letter, while there may not be Hawaii specific cases there is settled law cited in a March 27, 1980 Attorney General Opinion No. 80-4 which states:


Where a statute specifies that the incumbent shall continue to hold office until his successor is appointed and qualified, it is well settled that the incumbent retains
his office as a de jure officer and no vacancy exists at expiration of the incumbent's term. Therefore, the interim appointment power of the governor is not activated.

How clearer can you get that this is an unlawful action by the Governor?

There have been several press comments about Senate challenging the Administration and asking the courts for some kind of ruling to preserve its powers to advise and consent on a nominee.  Civil Beat reporter, Nathan Eagle reports that yesterday Commissioner Michael Champley was told to turn in his keys although Champley communicated to officials that this should not be construed as him giving up his position.   Tom Gorack was sworn in at 8:00 a.m. in the Governor's office.

Now, who will or can challenge the legality of Tom Gorack taking office?  Who will remains an unknown but anyone can file a petition in a challenge called quo warranto where the petition (Hawaii Revised Statutes 659-4) is filed in circuit court stating the facts. Then burden is on the respondent (Gorack) to answer why he thinks the law does not apply to him and he is legally entitled to hold the office.  It would appear, with the language "until his successor is appointed and qualified" and with AG Opinion 80-4 citing the well established principles, it would be difficult to argue against Commission Champley as a de jure officer, that is someone who is legally entitled to hold the office.

The Fallout - Political Interference On The Backs of Hawaii's Residents & Businesses 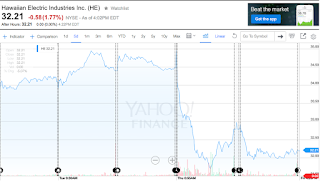 For many families utility stocks are usually viewed as less risky and favored investments to build financial security unlike riskier tech stocks.  It is common to find that utility stocks are held by retirees because reliable dividends help to supplement their monthly pension or social security incomes.  According to the HECO/NextEra merger application, about 25% of HEI shares are owned locally.  The night before the Gorak announcement shares closed at $34.50. Since the announcement, the shares have been hovering around $32.00, an approximately 9% drop in value, equating to $62 million of local value destruction in Hawaii in one day.

Utility stocks are also favored by many institutional investors.  So what may not be as transparent as the above are the affected Hawaii residents with pension benefits or have mutual funds whose investment portfolios include HEI shares.

But more importantly, given HECO's weakening financial position and lacking a stabilizing factor like NextEra's financial strength, the future outlook does not bode well given all this uncertainty. Prior to the merger application, HECO's credit rating by Standards and Poor was BBB-, one notch above non-investment grade.  The merger application stabilized HECO's credit worthiness with a neutral outlook given NextEra's strong financial position.  With Hawaii's unstable regulatory and unfriendly business climate, and without a strong financial partner, there could be a propensity to affect HECO's credit rating downward, without any cushion or safety net, it would be to non-investment grade level.

Who pays for the additional cost for these added risks of regulatory uncertainty and financial instability - the HECO customer - in HECO having to pay higher interest rates for access to capital thereby resulting in higher electricity costs.

In the Power Systems Improvement Plan, when discussing investments required for Hawaii's renewable future it said:


Achieving 100 percent renewable energy takes substantial capital investments.  All options, whether the Preferred Plans or other candidate plans, require substantial amounts of capital, compensated for by customer savings over time.  The total capital investments over the next 30 years for Hawaii is estimated to be $25.8 billion (in nominal dollars), of which the utility may invest 53%, or $13.6 billion.  The balance may be made by project developers, customers, and the State (via tax incentives).

With the kinds of antics happening under the Ige Administration, it looks like the anticipated savings will be wiped out and the cost of HECO borrowing money to make the necessary investments for a modern electrical system will be going up.  Hawaii's 100% renewable future is getting pretty expensive . . . mainly by self inflicted stupidity.


Posted by Energy Dynamics at 8:35 PM