Many are having a field day taking their cracks at the Hawaiian Electric Companies for bailing on the SunEdison renewable energy projects but have these same people even looked at SunEdison's legal and financial situation.  Or is local media just going to accept SunEdison's spin and pictures of an incomplete project because it's so much easier to bash HECO?

Any of these "reporters" could have easily googled SunEdison to get information.  It's easy to see the 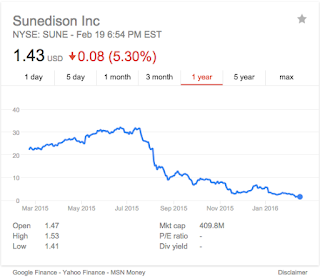 decline in its stock prices over the past year.  Just reading their most recent 8K filing should have given some indication that something is just not right.  The purveyors of "news" could have easily read the articles written by other media outlets to get a more rounded story but it's far easier to bash HECO than to delve into SunEdison's financials, which was called the worst performing renewable energy company by Bloomberg.


SunEdison Inc. is burning through its cash.

The world’s biggest clean-power developer was expected to have about $1.2 billion at the start of the year, an amount that may drop to $270 million if a pending court case doesn’t go its way, according to an estimate by Patrick Jobin, an analyst at Credit Suisse Group AG.

The company spent billions last year acquiring developers and power projects around the world. Now it’s spending more to convert in-progress wind and solar farms into electricity-generating assets that can be either sold off or retained for their long-term revenue streams. In the meantime, its balance sheet is dragged down by interest on almost $11.7 billion in debt, and two legal cases that threaten to crimp its cash position.

“Put simply, SunEdison has tried to run too quickly -- seeking hyper growth at the same time capital markets are challenged -- constraining their balance sheet,” Jobin said in a research note Thursday when he downgraded the company’s shares to the equivalent of hold. The company got another downgrade Friday from Janney Montgomery Scott, also to the equivalent of hold.

It appears HECO had good reasons to get out when it could.  SunEdison's missing contractual milestones gave HECO solid justification to exit a situation that would be untenable in the future if it choose to overlook the situation (damned if you do, damned if you don't).  This decision gave HECO a better chance of controlling the unfinished project and unused reserved capacity rather than be tied up in bankruptcy court holding the bag with unfinished SunEdison assets.

So all you guys out there, like Representative Chris Lee with your conspiracy theories and no fiduciary responsibilities to Hawaii's ratepayers, are you willing to take the blame should this fiasco head further south by forcing HECO to continue with these projects?  Hmmm, I don't think so.  HECO is not to be blamed for SunEdison's failed business model.
Posted by Energy Dynamics at 6:37 AM