Beware The Backdoor Tax On The Electricity Ratepayer

Today, Star Advertiser reporter Kevin Dayton reports on a proposal to air-condition public school through a surcharge on electricity bills speculated to be announced tomorrow in Governor Ige's State of the State address before the Hawaii Legislature.  Unfortunately, this sounds like a backdoor tax on the electricity ratepayer for a problem that the State has fumbled with for far too long and now punts to the beleaguered Hawaiian Electric Companies, an entity desperately seeking political and populace support for its merger application.

It sure appears to put HECO in a no-win position.  It's damned if you do (ire from its customers) or damned if you don't (ire from the Governor).  HECO's only way out is to know its core function and obligation to all its customers and hope the Public Utilities Commission and Consumer Advocate will do their jobs as well not and not capitulate to those seeking political expediency.

By proposing this backdoor tax via a surcharge on the electricity ratepayer, the Governor gets to say he provided a solution without affecting his priorities in the general fund budget and punts to place the burden on the electric utilities to solve the problem and to take the "heat" from electricity customers with higher bills resulting from an A/C surcharge buried in their bills.

We all have great empathy for teachers and students who are trying to teach and learn in unbearable classroom conditions but the funding for this fix should be allocations from taxes collected and deposited into the State's general fund.  The tax on the electricity ratepayer, called the Public Service Company Tax and other fees or surcharges coming from the electricity ratepayer should be used for the regulation of, investment in and operations for a safe, reliable and affordable electricity system for all customers.  The Department of Education is a customer not a ward of the electric utility.

Several times over the past year I wrote about the impact of the renewable energy tax credit on the general fund and the impact of the net-energy metering (NEM) program on a utility's fixed cost and the cost-shift impact on the non-NEM customer.  Now the Governor appears to want to further burden these customers (around 75% of HECO's customers):


The total lost contribution to fixed cost for the HECO Companies has increased from an estimated $19 million based on installed NEM capacity at the of 2012, to $38 million at the end of 2013 and to an annualized $53 million at the end of 2014. This is the estimated cost-shift to the non-PV ratepayer. [I suspect the same trend for 2015] For the tax year 2012 alone the renewable energy income tax credit accounted for 48.41% (total $179,018,000) of all state tax credits ($369,811,000) claimed. Currently, the information for tax year 2013 are not publicly available but PV installation growth indicate nothing different, ditto for tax year 2014. [I suspect the same trend for tax year 2015] This has a significant impact on all programs that receive their funding from the State's General Fund.

I find it totally ironic that as we all lament about the the high cost of electricity, certain politicians' actions and trajectory (No LNG, pro-NEM, pro-REITC) continually stick it to the electricity customer who cannot afford or do not have access to renewable and energy efficiency solutions to dramatically lower their electricity bills and must rely on the electric utility to lower its fuel and operational costs to result in lower bills.  These customers tend to be renters, lower income households - families living paycheck to paycheck if these backdoor taxation policies are adopted or existing programs not changed.

The rate of the Public Service Company Tax is another backdoor taxation venue imposed on customers of utility services.  This is a tax that is assessed on all companies regulated by the Public Utilities Commission and passed on to the ratepayer.  The rate of the tax is in excess of the PSCT's stated purposes therefore on July 1 each year all excess funds less $1 million gets transferred to the general fund according to law.  Here's an excerpt on the special fund where the tax is deposited from the PUC's 2015 Annual Report: 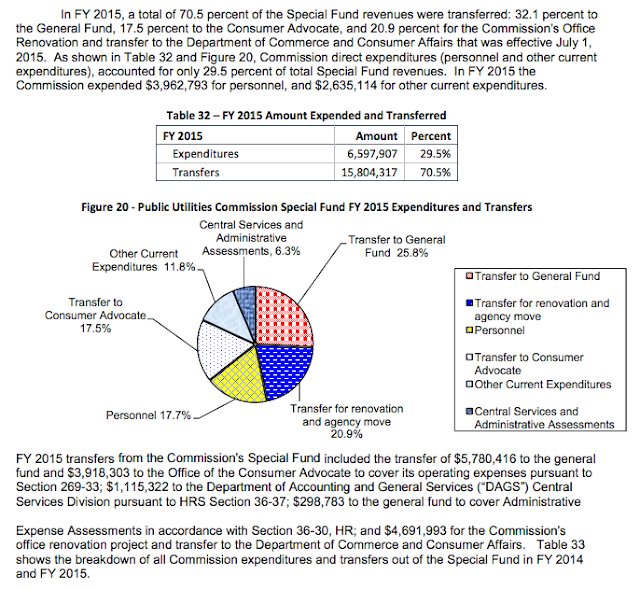 Lobbying to get the Legislature to pass a law to authorize a surcharge to support a specific interest without regard to ratepayer impact is not new.  It has happened before.  More on that in another post.

Posted by Energy Dynamics at 2:59 PM