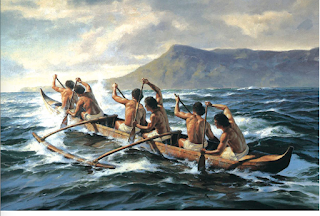 Yesterday, with the Hawaiian Canoe Racing Association State Championship races in Hilo ending the season, the focus now shifts to long distance races. As teams train for the Na Wahine O Ke Kai and Molokai Hoe races, this may be an opportune time to share an excerpt from a chapter I wrote for Infrastructure Investor's Infrastructure Risk Management: Assessing and Managing Dynamic Exogenous Risks published by PEI Alternative Insight where I used Hawaii's rainforests and the outrigger canoe to make a significant point about the synergy required for an energy transformation for a reader audience outside of Hawaii.

To avoid a prisoner’s dilemma [see my May 30 post], cooperation is inadequate to describe the necessary dynamics for an energy transformation. As keen observers of their natural and human environments and as practitioners in systems thinking, the strategies and concepts that must be embraced for a successful transformation are not foreign to Hawaiʹi’s peoples and are embedded in their heritage and values. A proverb, I ka nānā no a ʹike (meaning ‘by observing one learns’) and the Hawaiian value of Kākou (meaning ‘inclusiveness’), identify the essential components necessary to understand and accept a new paradigm through two analogies.

As an island environment, and as a potential microcosm of what larger electric systems will eventually face in the future, a Hawaiʹi biomimicry analogy may be the best example to conceptualize how multiple transactions resulting from new technologies and services should interplay within Hawaiʹi’s electric systems to seamlessly optimize both individual and utility investments for mutual benefit.

But it should be noted that in a rainforest environment not all roles are equal. In an even smaller environment – an ocean-faring, six-man outrigger canoe – business consultant Rosa Say helps us to understand the interaction among the stakeholders to capture this synergy, conceptualizing the regulator as the steersman, the electric utility sitting in seat one, new technologies in seat two and the customers and other stakeholders in seats three, four and five:

“There is a purpose for each of those six seats, and each is critical in the canoe. For instance the stroker is the pacesetter who sits in seat one, the one with the best view of the swells that are most imminent, the one who will set the rhythm every other paddler follows. Seat two matches the timing of the stroker on the opposite side of the canoe, and he is thought of as an alert communicator, especially when the ocean winds prevent voices from being heard from the last seat to the first. Knowing he has this back-up, the stroker will concentrate on the consistency of his pace. The steersman occupies seat six, the last seat, and is the ultimate decision-maker, however he trusts the stroker to adjust pace as he steers direction.

The steersman is also the captain, and he must know of the individual talent and strength of each and every paddler before he assigns the seat they will occupy. Most watermen will agree that all paddlers must have the common traits of discipline, tenacity, focus and endurance. However there are differences too, and a role for each seat that values these differences; qualities such as physical strength or alertness are valued more so in one seat over another.

... It takes the harmonious disciplined stroke of all six together to make the canoe surge forward through the surf with the least amount of effort, reserving the power of each when it is most needed. It takes every element of Lōkahi (agreement, cooperation and collaboration), and Kākou is achieved when the collaboration has resulted in perfect harmony and unity.[1]

In open ocean racing in an outrigger canoe, the goal is to reach your destination as fast as possible by optimizing each synchronized stroke and taking advantage of ocean swells, winds and currents, which the steersman is observant of in order to steer effectively and which the stroker can match with the appropriate pace. If the course or elements are read incorrectly, if the stroker cannot match the pace with conditions or if any one paddler is out of sync, the canoe will struggle to move forward expending needless effort and creating frustration among the crew.

These analogies describe the synergistic relationships necessary to transform Hawaiʹi’s electric systems to induce competitive markets among those providing various services who must also work cooperatively to optimize all utility, customer and third-party assets in order to maintain the function of the grid thus ensuring the delivery of a safe, affordable and reliable electricity service, which is the foundation for a robust economy as well as Hawaiʹi’s quality of life. This synergy, familiar to the Hawaiian culture as Kākou, is a call for collective action to achieve an optimal outcome.

Simply put, in Hawaiʹi’s parlance, energy transformation is a Kākou thing – we are in this together.

Hawaiʹi’s energy landscape is often described as a postcard from the future. As closed and bounded systems, the islands of Hawaiʹi are a manageable unit of study of complex systems that can change in a very short time period compared to a larger, continental area. Therefore, Hawaiʹi is a bellwether of what is to come for bigger electric networks and systems. Optimistically, the postcard will beckon one to a competitive-cooperative partnership within a seamless electric system paradise, a sustainable model that can be exported throughout the world. Or the postcard will heed warnings from an electric system dystopia where the commons have been ravaged solely for short-term gains. I hope for the former.