It's Time To End NEM In Hawaii 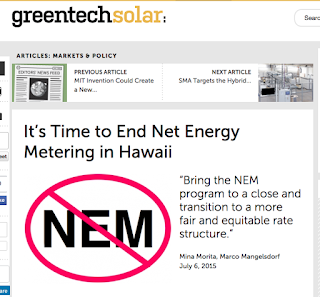 Marco Mangelsdorf and I co-penned an opinion piece on net-energy metering which was published by GreenTech Media this morning. Click here for the entire article.

The total lost contribution to fixed cost for the HECO Companies has increased from an estimated $19 million based on installed NEM capacity at the of 2012, to $38 million at the end of 2013 and to an annualized $53 million at the end of 2014. This is the estimated cost-shift to the non-PV ratepayer. For the tax year 2012 alone the renewable energy income tax credit accounted for 48.41% (total $179,018,000) of all state tax credits ($369,811,000) claimed. Currently, the information for tax year 2013 are not publicly available but PV installation growth indicate nothing different, ditto for tax year 2014. This has a significant impact on all programs that receive their funding from the State's General Fund.


Posted by Energy Dynamics at 7:40 AM